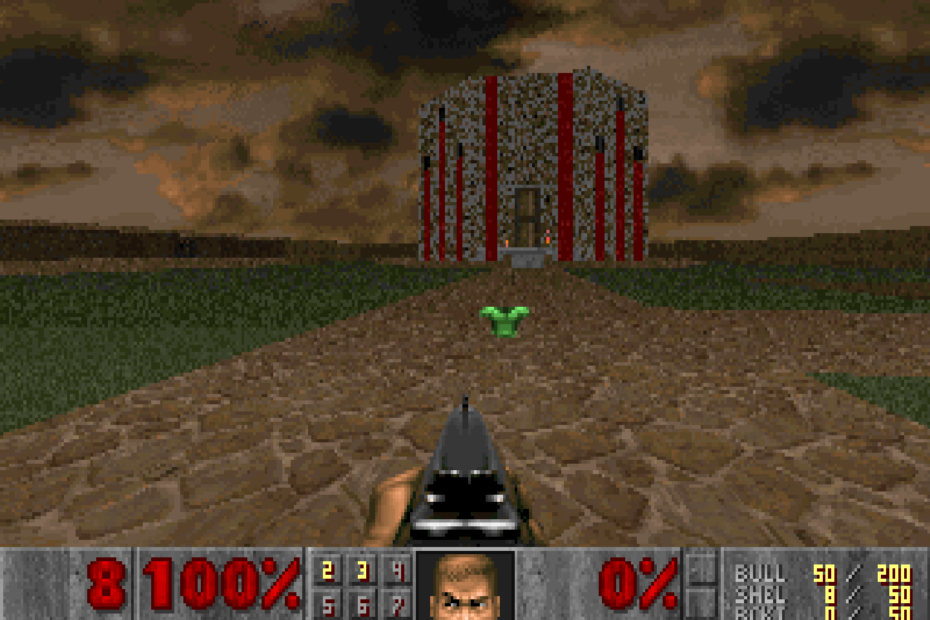 If you’ve heard of Michael Reed’s name, chances are you’re familiar with Hoover Dam. A WAD known for being one of the pioneers of the realistic map genre. On the other hand, after that, not many of Reed’s WADs have the same fame, and it’s a shame, because considering this particular level among his repertoire, we have a great designer who demonstrates a sweet talent for creating complex, expansive and intense maps.

The Bleeding Tower Of Pisa, with a quite unique name, is a single-level WAD released in 1995. The map is, as you might expect, themed around a central tower which expands the level into a variety of areas to explore. With a simple visual theme, it makes heavy use of wood and green marble textures, as well as blood for liquids, giving it a gothic theme, reminiscent of Thy Flesh Consumed. The map features a considerable variety of architectural areas and sub-styles, giving it an appreciable atmosphere that can be felt during exploration. With good scenery and full panoramas, the map is attractive in every sense of the word. It doesn’t go into over-detail, but it does manage to create a consistent quality that is felt from start to finish, add to that the huge number of distinctive rooms and areas it has, and we have a WAD with a real sense of exploration, that progresses as well as it evolves thanks to a great synergy between visuals and fun.

With over 400+ enemies in Ultra-Violence, the map shows a considerable challenge, and a somewhat long duration between 20-30 minutes, which can be a bit tiring at times. On the other hand, this long duration is justified in its expansive design that takes us to different places. We start the map in a green area, which overlooks the cool central tower. Each side is a new area to explore which will allow us to enter the tower. Inside the tower, the map expands its design quite considerably, showing us as many rooms as we can count on our fingers. It takes us to subway areas that look like mines, sewers with vines on the walls, brick labyrinths, pools of blood, marble palaces, and so on. The map doesn’t feel repetitive at any point and has a merit of its own in its explorative quality.

The gameplay manages to remain balanced enough to offer an entertaining experience. It’s nothing out of this world, with a modest design that uses high numbers as the main method of combat. On the other hand, it’s not a map where we run into a hundred Cyberdemons in a single room. Enemies have been placed with some consideration, which makes progress feel attractively fun. A new MIDI and it would have been epic!

The map, due to its huge size, has the disadvantage of being a bit confusing at times, particularly the search for the red key in the mines. The central focus is around the tower, which we must use with an elevator to explore different areas, which will lead us to the keys. This can be a bit lost if you don’t have a plan, but it’s not totally cryptic. With a little patience, it can be done. After all, if I, with my three brain cells managed to do it, so can you!

The Bleeding Tower Of Pisa is a great level that manages to strike a sweet balance between its appeal and its exploration. Surprisingly fun and expansive.