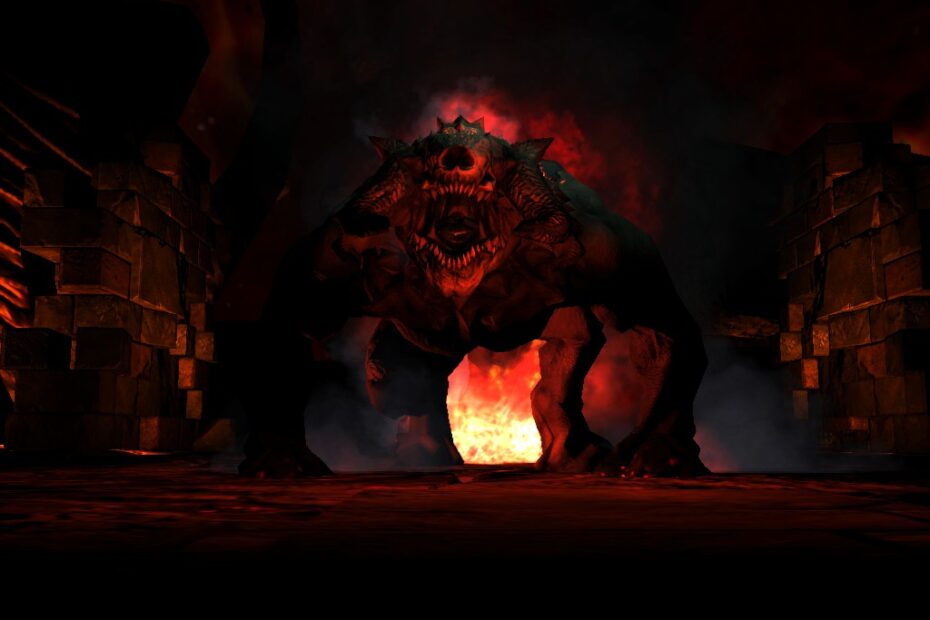 A game with demons is bound to have some spooky scenes!
(Not ranked, just numbered)

From day one to the present day, the Doom saga is one that has been as iconic in the field of action as it has been in the field of horror. Even through its pixelated 320×240 graphics on a CRT monitor with a gamma so ridiculously low that your eyes had to narrow to see properly. It was a very new and different world for all gamers. Not only was it the game that would become the pioneer of the genre, but also one that brought with it a handful of themes never before explored in such a direct and palpable way. Now, you may laugh at those 10 pixels of blood every time you shoot a demon, but 27 years ago, those 10 pixels of blood were like watching a live massacre. Doom, partially unintentionally, became an example of a horror FPS game. Years later, the franchise would evolve and embrace this genre with open arms. Doom 3 probably needs no mention, but now, we’ll take a different approach. Instead of focusing on a single game, let’s examine the entire list of installments and observe, with eyes wide open and ready to jump, the scariest moments of the saga!

You know them. You love them. You fear them. The Barons of Hell at the end of the Shareware episode of Doom, also known as the Bruiser Brothers, acted as the final boss of grace in the first fantastic episode of the iconic game. Phobos Anomaly is a map that inspires terror. Its very title is sympathetic to terror, but the map itself has a heavy atmosphere that we won’t find again until Thy Flesh Consumed. From the tetric and agonizing music to the furious duel against these two bosses. Imagine being a kid in the 90s and seeing this map for the first time. Pure terror in its most epic form.

MAP11 is iconic for two things: Having two names and one pesky motherfucker that will scare you shitless. Doom’s most evil enemy, the Arch-Vile. Picture this, you’re playing along, about to reach the blue key in MAP11, and just as you get the key, a closet reveals itself to your presence and you hear the menacing electronic sound of a demonic computer loading. You turn a few degrees to the side and come face to face with it. An imposing, slender, terrifying figure, stretching its arms in the air and conjuring fire around you. A few seconds later you hear an explosion and your body lies charred on the ground. This is the Arch-Vile, a torturing engine made of flesh and bone that you will later discover is even worse than you can imagine.

It’s no secret that Thy Flesh Consumed is, without a doubt, the most oppressive, heavy and fucked up episode of classic Doom. From the clear inspiration in biblical names with apocalyptic connotations, to the brutal development of the visual theme with gothic, grotesque and groovy elements. However, probably the creepiest element of this episode is how sadistic the first two maps are. E4M2: Perfect Hatred is the epitome of official difficulty, in my opinion; it’s hot, it’s fucked up, it’s unfair, it’s tight and it’s intense. Imagine it’s 1995 and after the breeze which is the first 3 episodes, you jump into this one. It’s a sadistic jumpscare made Doom. I love it.

If you were one of the lucky ones who, convinced by the shareware episode of Doom, decided to buy the full edition of the game, then you got the fantastic surprise that Episode 2: Shores of Hell, threw you directly into the fires of hell, and not only that, to bigger, less linear and levels full of demons. But the real treasure comes in the form of a gigantic demon with two legs, one arm and a missile launcher. In all its technological glory blended into a union of flesh and metal, the Cyberdemon makes its presence clear as the final boss in E2M8: Tower of Babel. In all its pixelated glory, the Cyberdemon is an imposing tower of flesh. From its clear image to its enormous potential, it is, ultimately, the true final boss of Doom, deserving of both its peculiar reputation and fascinating respect. This creature throws itself at us in a straightforward manner, without any preambles. E2M8 is a combat arena specifically designed to engage the player alongside the Cyberdemon in a battle for supremacy. Novices will inevitably be torn apart by this giant. It is a boss as epic as it is terrifying, from its classic design, creepy mechanical movements, grotesque design and brutal power.

Final Doom is probably one of the best gifts Doom fans received in the 90s. Not only is it two iconic megawads in one, but it’s also an incredibly iconic map collection, fascinating, challenging and with more creepy moments than any other map. One map in particular in Plutonia rings the bells. It is MAP11: Hunted. A gigantic labyrinth that the player must complete in order to successfully exit. However, there is a catch: The player is pursued by 18 Arch-viles (in Ultra-Violence), each of them with a huge thirst for marine blood. The map is a fascinating example of a concept map from yesteryear, one of the first of its kind. It takes a different idea and applies it in such a way that the result is as iconic as it is sadistic. Seeing the Arch-viles at the beginning of the map is a perfect tease of the madness that follows, when all the demons will spend the rest of the level chasing you. Even to this day, this maze never fails to raise the hairs on my neck when I hear the electronic sound of an Arch-vile waking up. Now multiply that by 18. Pure horror.

While Doom 64 is not necessarily meant to be a horror game, it embraced the original idea of survival horror and made full advantage of N64 system by cranking darkness, color filters and uneasy shit to the hundred. The result is an amalgamation that plays and feels like Doom, but like if Nightmare! Was turned on the entire time, plus a pitch of absolutely Lovecraftian horror-levels of monster design. Oh, and let’s not forget the spooky ambient soundtrack that leans towards the strenuous feel of dread that you’ll feel as you play the entirety of this fascinating game. While the general vibe of the Doom series is run & gun with demons in the background, Doom 64 felt like run & gun, but scared shitless. Just the right way, indeed.

While Doom 64 embraced the scary atmosphere of the idea, Doom 2016 took the action scene and pumped a ton of testosterone into it and gave it a metal soundtrack, spawning the all-mighty Doom Slayer myth. On the other hand, Doom 206 succeeds, also, at creating an interesting and spooky lore full of hellish stories and disturbing environmental design, but not only that, it also brought some really adrenaline pumping moments, like meeting the all new Cyberdemon for the first time. You’re just walking normally getting ready to enter a new room and bang: 6-meter-tall machine made out of flesh and metal pulls you like a little bitch and throws you across the entire room. This beast is big, ugly and majestically gruesome. A resurrected hell lord ready to ruin your day. Best yet, it revives for the first time you kill and teleports you to the depths of hell in all Doom glory. This was a reminder that even if you are all-powerful, there’s always a bigger demon.

This probably comes as a surprise to no one, but Doom 3 is, without a doubt, the scariest of the series. After all, that was its general purpose. It was an action game that was geared towards creating a heavy, terrible and 100% demonic atmosphere. Doom 3 is full of hellish references, pentagrams, gore, scares, darkness, lots of darkness and things that would make your Catholic grandmother fall to the ground. Probably one of those things is when we travel to the Hell of Doom 3, one of the best, if not the best hell we have seen in the saga. No disrespect to Doom 2016, Doom 3 simply took the atmosphere to 200 and created something extremely tetric and heavy. Hell is a terrible place where fire reigns, suffering is eternal and demons are everyday life. Not only does it have a unique design, combining gothic fortresses with surreal scenarios, but it even changes the appearance of the demons to give them a more satanic style; full of scars, pentagrams and symbols. Undoubtedly, a worthy hell.

Ok, ok. If you’ve played Doom 3, you know this scene… but if you haven’t, major spoiler ahead: This shit is probably one of the best and most irrelevant jump scares of all time. Its sheer purpose is to make you shit yourself in awe, horror and amazement. Probably because it happens so early in the game, but the mirror scene in Doom 3 is one that sticked with me for a long time back when I was a kid. It’s simple yet effective. Rustic yet advanced. It uses all the tricks in the book and uses them well. You’re walking normally, exploring some of the various rooms in the Mars Base, when suddenly, you stumble across a bathroom stall. You go inside in the hopes of finding something good (why would you do that in a bathroom tho?) and in the end, you only find one thing: Your soul crushing realization that hell is playing with you. A mirror unfolds in front of your eyes and you gasp as the air leaves out of your body when you look at it. The mirror, oh the mirror. What a good jump scare!

Ok, this might be cheating, but hear me out: The scariest moments in the Doom saga are the ones made the by community creators. Don’t believe? Get ready to launch yourself into a world of sheer terror. Doom’s a game that’s very well known for its creative output and near limitless potential. For decades, the fanbase has managed to create their own content with such speed, tenacity and creativity that it becomes a whole new world full of potential. Such is the potential that there’s been game mods and WADs that are far scarier than anything else. Go around, ask some questions and you’ll get some answers. Doom can scare you down to your soul if you start playing some of the goodies the fans have created. From simple, spooky conversions, to completely new games that will show you the true definition of DOOM.

You can find the full feature on issue #15.